“A fabulous and heartwarming tale of two friends and the secrets they keep from each other, on one amazing day out…”

In Extreme Kissing, Bethany and Carlota are best friends who long to escape the stresses of life as GCSEs loom on the horizon. Stresses such as a ridiculously strict step-parent (Carlota) or a long-term boyfriend displaying definite pre-dumping behaviour (Bethany).

Carlota suggests the ultimate in stress relief: Extreme Travel, where the journey is more important than the destination. The girls embark on a wild day out in London, choosing tasks at random from the pages of a magazine; extreme challenges that include exclusive shopping, excellent snogging and… explosive secrets.

“Are we still talking about my brother’s socks?” – Bethany

“Extreme Kissing is about lots of things: friendship, family, trust, love and choices. It’s also about living life, and taking risks every now and then. I would highly recommend this to readers of Louise Rennison and Liz Rettig, and YA fiction fans in general, as I’m sure you will thoroughly enjoy this teen tale of extremes.” Wondrous Reads

“Once again, Luisa Plaja has taken a chicklit book, and made it so much more than that. Not that chicklit can’t be deep, but Extreme Kissing has so many facets. It’s a great book for any teen, addressing identity, friendship, family, and how deceptive appearances can be. The idea is cool, the pace is fast and the book is fun.” About Books For Teens

“I really enjoyed this novel. Luisa Plaja’s second novel is as brilliant as her first, if not better.” So Many Books, So Little Time

“Bethany and Carlota are both so real, so authentic, that I couldn’t help but be drawn into their lives, their secrets and their pasts.” Bookbag

“If you are looking for a glittery and extremely funny book, think of this one. The story is just so much fun to read, I absolutely enjoyed it.” Marjolein Book Blog

“Things aren’t quite what they seem in Extreme Kissing and it just added to this novel’s greatness… you get romance, lies, mystery, breaking out and living life, and the meaning of friendship.” Teens Read Too

Extreme Kissing is also available in Dutch, entitled “Gevaarlijk spel” and translated by Jasper Mutsaers. It’s published by Moon Uitgevers, and this is the Gevaarlijk spel page. 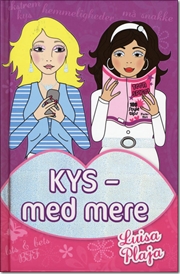 Extreme Kissing has been translated into Danish by Elisabeth Kiertzner and is published by Flachs. It’s available in bookshops in Denmark and online..

"Hello, and thank you for visiting my site. My name's Luisa Plaja and I'm an author, editor, linguist and creative writing tutor. Have a look around the site, check out my books and see what I've been up to with my latest news. Send me a message through my contact page - I'd love to hear from you!"